Glass Mugs in the Cricut Mug Press: Do They Work?

This post and photos may contain Amazon or other affiliate links. If you purchase something through any link, I may receive a small commission at no extra charge to you. Any supplies used may be given to me free of charge, however, all projects and opinions are my own. 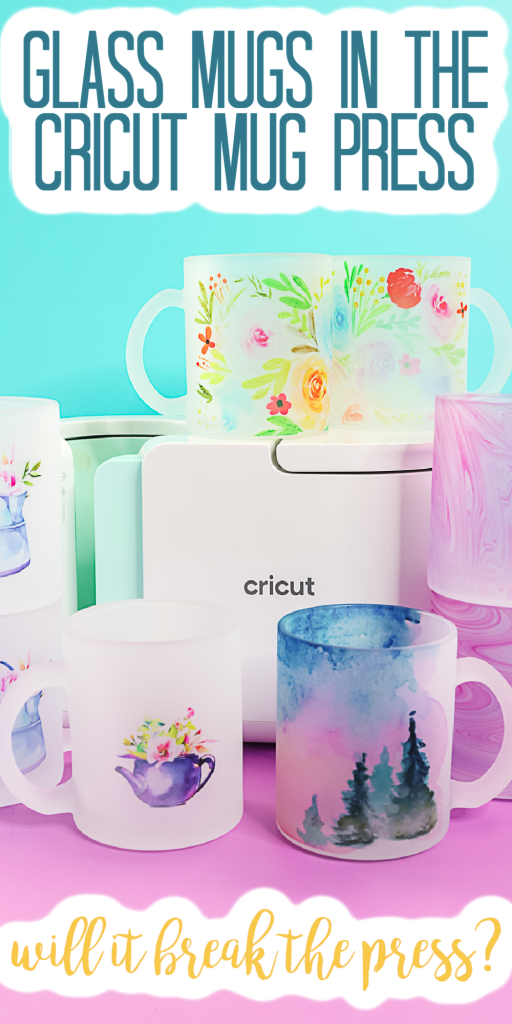 Can’t watch the video or missed some of the information? You can keep reading below to see my results!

The press has one button and that is the power button. Here are the colors and meaning of that light:

There is also an LED progress bar that can be used to track transfer progress. It will light up as the mug is pressed and the closer to the end it gets, the closer your mug is to being complete. So, we will be looking for a solid red light or orange flashing light to indicate that something is wrong with the press during these tests.

Put the mug inside of the press and close the handle. The mug press will start timing with the LED strip lights. Be sure the mug handle is centered in the opening especially if you are doing a full wrap design.

Wait for the mug press to start beeping then lift the handle. I like to wear heat resistant gloves to remove my mug and set them on a heat resistant mat to cool slightly before removing the paper from the outside.

Results from Pressing Glass Mugs in the Cricut Mug Press

I did a ton of experimenting with glass mugs in the Cricut Mug Press and you can see them all in the video above. Here is a summary of my results:

When the indicator lights do not go all the way across and just stop lighting up altogether, that means the timer isn’t working. That isn’t too uncommon with the Cricut mug press. I have that problem all the time when I’m doing tumblers. I generally time it with my phone when it does this. It seems to happen very often with glass mugs in the Cricut Mug Press. I found 4 1/2 to 5 minutes worked fine for these sublimation prints.

Did the glass mugs break the Cricut Mug Press?

I actually didn’t have any issues with my glass mugs in the Cricut Mug Press except for the timer issues mentioned and the glass beer stein cracking. The mug press itself is still working fine. So, why do glass mugs seem to be breaking other peoples’ mug presses? I do have a theory.

These glass mugs were the most inconsistent sublimation blank that I’ve personally ever used. I had eight of them in total. The sides were super inconsistent. They are supposed to be a straight wall sublimation blank. With the Cricut mug press, you should always use a straight wall blank. These are extremely wavy, and you can even see it in some of the sublimation. Some of it is lighter in some areas than in others. That’s because there’s a dip in the mug where the light area is.

The glass mugs also varied in diameter. With the Cricut mug press, you should use mugs that are a diameter of 3.2 inches to 3.4 inches. That means if you measure all the way from side to side, it should be 3.2 inches to 3.4 inches. It is a pretty narrow margin. These mugs were supposed to be towards the smaller side. I noticed as I was doing the tests that some of them fit way looser than other mugs.

My final thoughts are that glass mugs in the Cricut Mug Press would really be at your own risk. I really think you could do glass mugs fine in something like the tumbler press. It has way more adjustment to account for the variation in the glass mugs. Whereas the Cricut mug press, you really need to be in between 3.2 to 3.4 inches.

When you get any blank that’s on the small side, you’re definitely going to see it with the mug press which could result in it breaking. At that point, Cricut would not be able to replace it as you used a sublimation blank that was not the correct size. Just from the variation I saw, I’m fairly convinced that there are some bad mugs out there that are even smaller and vary even more on the sides as far as being a straight wall

I’m not saying that glass mugs aren’t amazing. I’m just saying that maybe they’re not right for the Cricut mug press because I feel like there is a chance that you might break your mug press. Stick with the ceramic mugs, and just make sure you stay within that range at 3.2 inches to 3.4 inches in diameter. I’ve seen other people do the glass mugs and not have any problems with their mug press, and then I’ve seen people do glass mugs and have issues with their mug press. I definitely think maybe the variation is the key there, and you never know what you’re going to get when you order the glass mug sublimation blanks. That’s my best advice on glass mugs in the Cricut mug press.

This article was originally published by Google.com. Read the original article here.
SaveSavedRemoved 0

How Skylights Transformed Our Home + Win Your Own Skylights!

We will be happy to hear your thoughts

Recent Posts
Most popular this month

AerWo Rustic Wall Decor Home Decor for Living Room Set of 4, This is Us Wall Decor and Together Wood Wall Art Sign with…

This website is a participant in the Amazon Services LLC Associates Program, an affiliate advertising program designed to provide a means for sites to earn advertising fees by advertising and linking to amazon.com

For customers
For vendors
Sign Up for Weekly Newsletter